Find new pirate romance authors, talk about the upcoming release for the newest Pirates of the Caribbean movie: Dead Men Tell No Tales and join us in the next treasure hunt!
We’re doing another Treasure Hunt May11-June 13 with lots of booty. Here’s a link to the main tour page at The Silver Dagger Scriptorium: http://bit.ly/2pCShcR

The Grand prize: a new KindleFire!
Keep checking in! 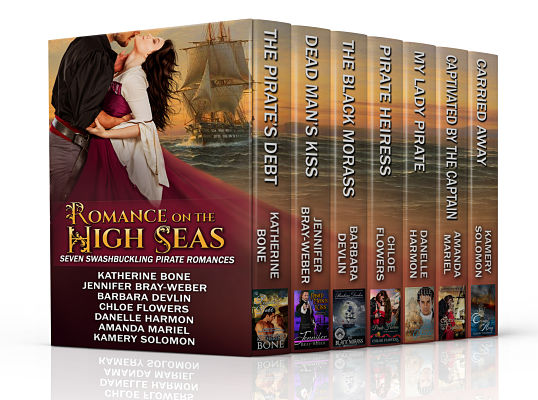 National best-selling historical pirate romance author Katherine Bone has been passionate about history since she had the opportunity to travel to various Army bases, castles, battlegrounds, and cathedrals as an Army brat turned officer’s wife. Who knew that an Army wife’s passion for romance novels would lead to pirates? Certainly not her rogue, whose Alma Mater’s adage is “Go Army. Beat Navy!” Now enjoying the best of both worlds, Katherine lives with her rogue in the south where she writes about rogues, rebels, and rakes—aka pirates, lords, captains, duty, honor, and country—and the happily-ever-afters that every alpha male and damsel deserve.

Q: We know pirate romance is your thing. What does it mean when you post that you have your signal flag out?
A:  Raisin’ the Signal Flag is the title of my blog and newsletter. Without radar or high tech communications, ships hailed each other with signal flags. Raisin’ the signal flag is my way of letting readers know that I’ve got news to share. Woot!

Excerpt from Katherine’s pirate romance (included the the Romance on the High Seas boxed set) The Pirate’s Debt:

Markwick stiffened. Blackmoor’s reasons for enlisting Markwick’s help were triggered by love for his wife. Markwick’s sense of responsibility went deeper, to a place he’d never allowed himself to go out of respect for Walsingham. While it was true that Chloe had exceeded many levels of Markwick’s patience when she was younger, since his engagement to Prudence, she’d shown herself to be intelligent, talented, loyal, and a most beloved sister and friend. She was also enamored by the Black Regent, which put his identity at even greater risk.
What could he do? How far was he willing to go to bring Chloe home safe and sound?

“For the duchess’s sake,” he began, “I will do my best to find Chloe. You have my word.”

“Remember, her willful head is in the clouds. That, dear friend, makes her dangerous. If she spies her brother, she will most likely flee to avoid facing his ire. But if you find her . . . well, that is a trap well laid.”

“Surely you place too much—”

“I’ve promised my wife that you will find her before Walsingham does.”

Markwick bowed. “I shall strive to earn your confidence.”
He gazed at the missive in Blackmoor’s hand once more, suspecting something else was responsible for the duke’s persistence that Markwick should be the one to locate Chloe. “What’s in the letter?”

Blackmoor handed him the missive, then strode to the door. “Have a care for your soul, Markwick. While the Fury demands forte, females rein a tempest of emotions sure to drown better men.”

Markwick straightened. “Aye, sir,” he said, gazing down at the note.

The screen door slammed. When he looked up again, Blackmoor was gone.

Markwick opened the note, then leaned back on the desk. His jaw slackened at the words on the page.

I ask you one question: is a body unhappy about another unless she is in love? I fear we both know the answer to that now, and a gentle violence thrills my soul as I share with you that I intend to sail with the tide. I cannot face the snares and wiles of this world without love to recommend me. Therefore, I beseech you to keep my secret, for you are the only one I trust.

Markwick has disappeared. As you are no longer betrothed, I am finally at liberty to confess to you that I love him. I have always loved him, and I cannot bear for him to suffer alone. Sources close to my brother inform me that a man fitting Markwick’s description has been seen in Torquay. Therefore, I’ve attained passage for myself and my maid aboard the Valerian.

Do not be alarmed for my person or harden your heart against me. Dry your earnest tears. My virtuous intentions steer me toward a higher destiny.

Markwick shut his gaping mouth, then crumpled the letter in his hand.

It couldn’t be true. Blackmoor was right? Chloe loved him? How was that possible? Why? Until now, he had always perceived her attention as infatuation because he’d been the only man her brother allowed around her.

He dropped the foolscap and swiped his fingers through his hair. If he failed to rescue Chloe from another one of her outlandish adventures, Prudence would blame him. Which meant Blackmoor would blame him. Not to mention Chloe’s brother. If Walsingham found out Markwick had known where Chloe was bound and hadn’t alerted him, the bond between friends would be severed for good, making his stint as the Black Regent even more perilous. If anything happened to her, Walsingham would not rest until Markwick was hunted down. That endangered the Regent’s whole design. And a dead Regent could not help the people of Cornwall and Devon.
Markwick hopped forward and yanked open the cabin’s screen door.

Pye stood there, just outside the door, waiting. “What be your orders, Cap’n?”

Had Blackmoor ordered the one-legged pirate to stand there? “Notify the crew that we have a target in our sights. We make way with the tide.”

“Aye, sir.” The salty pirate grinned. “As soon as I’d seen the ol’ cap’n, I knew we’d have us an adventure ahead.”

“Spare me your excitement,” Markwick grumbled. “This adventure may very well lead to my bloody end.”

This site uses Akismet to reduce spam. Learn how your comment data is processed.